The stone terrace already looked older than the house, softened to a pleasant mossy gray under the relentless dripping of English rain, its stone balusters pressed by fat shrubs and draped in twisting vines of honeysuckle, wisteria, and the teacup-sized pale green flowers of a clematis. White roses climbed up the house from beds filled with brilliant blue agapanthus. Beatrice stooped to cup in her hands a waxy blue flower head as large as a hat and to wonder if plants ever sensed how far they were from home . . . Beyond the terrace, a croquet lawn fell away on its farthest edge to a lower terrace of rolling grass . . . Below, the stacked red roofs of Rye poked up from its flat skirt of marshes, and beyond, the sea formed a broad, glittering swath under the wide blue bowl of the sky.

I definitely did NOT think that I would be DNF-ing The Summer Before The War. So certain was I of this that I kept reading, and persisting, and pushing through till I ended up finishing 267 of the 473 pages. It was at this point that I realized I had way too many other books that I actually looked forward to picking up!

I’m not completely sure why I’m DNF-ing this. I remember enjoying Major Pettigrew’s Last Stand and have been thinking about re-reading it at some point. This one has a small town as its setting, and has the kind of microscopic focus that I generally enjoy—lives of ordinary people with all its complexities, and ordinariness. This is also a kind-of-coming-into-her-own story of a 23-year-old female who chooses independence over marriage in Edwardian England.

That Beatrice, the 23-year-old, is going to fall in love with Hugh, and he with her, is obvious from the start. That Daniel, Hugh’s cousin is gay, and will most likely meet some sort of heartache is also obvious. I don’t have a problem with predictability. If anything, I like knowing the lay of the land. But in this case, the predictability made the story boring. 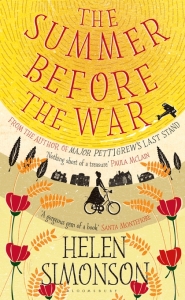 Agatha Kent is Hugh’s and Daniel’s aunt, and is along with Beatrice, Hugh, and Daniel, one of the epicenters of the story. She’s the one who gets Beatrice appointed as the Latin teacher in the local school amidst much uproar. She’s a progressive but is not given to crossing boundaries that shouldn’t be crossed. She’s also a veteran at navigating the waters of social niceties and its inherent politics and power struggles.

Hugh is a nice young man, and Daniel is a temperamental poet. Agatha’s characterization is compelling but she’s flat as a character. She has the potential to be interesting as when she is “forced to consider whether her sympathetic interest in her staff’s families might have more to do with appearing generous than any willingness to be inconvenienced by their actual problems,” but such bursts of realizations are few and far between.

Beatrice’s character shows promise, and one can see the way she is evolving through the course of the story. Her uneasy alliance with Mr. Poot who’s a sort-of-adversary, and in fact the revelation of Mr. Poot as not just a character inserted for the purposes of foiling Beatrice’s appointment as a teacher, but as one who while sort of flailing around, is also a person in his own right, caught my attention. However, Beatrice gets only a part of the limelight. (And Mr. Poot is there in just a scene or two).

Writing this, it occurs to me that one of the reasons I could not find myself sufficiently engrossed in The Summer Before The War is because of what-felt-to-me the lack of any development in three of the four major characters. They remain at Page 267 pretty much as they were at page 1.

I do want to point that there’s some good stuff in there too. Simonson’s especially skilled at capturing both the rhythms of a small town life, and at evoking the Englishness of her setting. There’s also bits and pieces about war and its paraphernalia that provide some food for thought (and that may perhaps increase in the second half of the book, now that the stage’s been set). Nonetheless, I’m happy with my decision to DNF this, and instead proceed with The Long Way to a Small Angry Planet and Middlemarch and maybe also All The Birds In The Sky!