Andrew Blackshear is a straitlaced young man with strong beliefs about propriety and honor. Lucy Sharp is his opposite, having been brought up in a manner atypical of the society and milieu she occupies. Their initial attraction to each other stems from the glimpses they have into each other’s hearts which seem to hint at something more than the personas they don. And yet, one of the reasons why I could not warm up to this story very much is right here—in their initial stages of attraction. 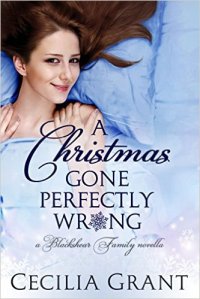 The opening scene of the story—Lucy is riding astride in the middle of a lane on a windswept, rainy afternoon when Andrew stops to offer assistance, catching his first glimpse of her—becomes a defining moment in their attraction for each other. He is arrested by her sight for reasons which my brain completely failed to latch on to. Maybe because the moment was a riff off of insta-love, a trope which is one of my least favorite? To be fair to Miss Grant, Andrew’s and Lucy’s relationship does not spring entirely from this one moment. But the moment does become a cornerstone in their attraction for each other and my lukewarm reaction to it meant that I was always going to be suspicious of the relationship that followed in its wake.

Andrew is a character to whom a “gentleman’s honor . . . is no frivolous indulgence. If he’s any sort of worthwhile man it’s his very backbone,” and one can see that the story moves the way it does in large parts because of this “backbone” that forms the core of Andrew’s character.

On the other hand, one of my main beefs with the story is the way Lucy’s character is written. Her manipulations of Andrew felt as if the author was manipulating me, the reader. Her actions felt like contrivance on the author’s part— attempts to orchestrate events in a certain way for the sake of moving the plot along, rather than organic everyday happenings in the life of the hero and the heroine. However, once Grant DOES manage to get her pair together, quite a few of their later conversations has that everyday feel of been-together-for-a-while which is quite lovely to read about.

Perhaps the biggest reason for my not really enjoying A Christmas Gone Perfectly Wrong is that we see things more from Andrew’s point of view which in this case translated into me feeling as if I never really got to know Lucy’s character. Compared to Andrew, Lucy feels uni-dimensional. I could see the change in Andrew through the course of the story but Lucy’s trajectory felt flat to me. She just didn’t feel interesting the way Andrew did.

One of my favorite moments in the story again fell to Andrew’s share while Lucy simply benefits from his perspicacity. The two are quarrelling in the middle of a party when Andrew realizes that they were both talking past each other—addressing the idealized version each had in their head of the other rather than the person standing in front of them. I read the scene and lit up in recognition. Who hasn’t been the recipient, or the originator of this sort of “talking past” at some point or the other?

I’ll end with this bit:

You can’t really know whether a sentiment is abiding until it’s had a few years over which to abide, can you? Surely everyone who marries must let go the need for certainty, and proceed to some extent on hope and faith.

This is a fun holiday-themed novella with a super intriguing premise. The execution isn’t as great as the premise itself but it’s a fun book to pass time with.

Here’s how the story starts: Earth has been invaded by aliens. Only, they aren’t interested in turning everyone to dust. Or kidnapping any earth people for any nefarious experimentation. They don’t really seem to be interested in doing anything except being rooted to one particular spot (so much so that people started wondering if they were some species of alien plant life), and glaring.

[n]o plant ever glared like that. It was a look of utter, withering dissaproval. The first time I saw it in person, I thought, Oh, my God, it’s Aunt Judith.

Why have these beings come to Earth? Why are they glaring with such disapproval? Can they even understand us? And why do they react the way they do to certain words in certain Christmas carols? All these are questions that our heroine races to answer.

I loved the start of the story, and I loved the ending. The middle sagged a bit for me. The endless list of holiday songs became a little tedious though it left me in awe of the author’s prodigious knowledge of all the music! Despite the too-muchness of it, that music is the linchpin of this story was my favorite part about it. One of the reasons I love this time of the year is the music. I love how singing together feels so joyous, and magical, and Willis’s story captures this wonder perfectly.

A bit for you to enjoy:

The commission at that point consisted of three linguists, two anthropologists, a cosmologist, a meteorologist, a botanist (in case they were plants after all), experts in primate, avian, and insect behavior (in case they were one of the above), and Egyptologist (in case they turned out to have built the Pyramids), an animal psychic, an Air Force colonel, a JAG lawyer, an expert in foreign customs, an expert in nonverbal communication, a weapons expert, Dr. Morthman (who, as far as I could see, wasn’t an expert in anything), and . . . the head of One True Way Maxichurch Reverend Thresher, who was convinced the Altairi were a herald of the End Times.