Cluny Brown’s saving grace was not the eponymous heroine but the other characters whose frequent appearances in alternating chapters rather reminded me of an episodic story, and of a play more than a novel.

It’s 1938, England, and Cluny Brown, who took tea at the Ritz one afternoon (because she wanted to and could), is constantly told by one and sundry to not aim for more than she should and to remember “her place” in life. Her uncle is a plumber, “respectable, respectful, and self-respecting,” and in a last ditch effort to make Cluny understand her place he sends her off to be a parlor-maid at a big house in Devonshire, Friars Carmel.

That the world around her wants Cluny Brown’s actions, indeed her very being, to reflect the class into which she is born is made obvious, over and again. Thankfully, our heroine has a joie de vivre that refuses to be stamped out. (Mostly because of her tendency to be so lost in her own head that the purported import of her behavior, as others would want her to think about it anyway, is frequently lost on her).

Despite all of this Cluny Brown’s story is sort of non-interesting. I was glad to see that she “felt more like herself, as though she had at last stopped acting a difficult part,” in the end but I’m not sure why an entire book, in fact this exact story had to be told for that to happen. The ending with respect to her love life is quite abrupt but I frankly didn’t care much about the abruptness because I couldn’t dredge up enough enthusiasm for our heroine in the first place. 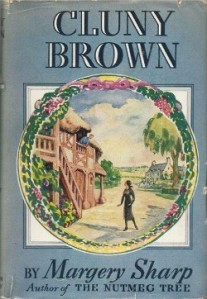 On the other hand, there’s the lady of the manor, Lady Carmel, her son and heir, Andrew, and Andrew’s stunningly beautiful friend Betty whose beauty renders men and women speechless. All three of them turned out to not be quite what I thought they would be and it is this sharpening of their characters, this revelation of their multi-dimensionality that made their story so much more interesting than the straightforward unfolding of Cluny Brown’s tale who remains exactly what she was at the beginning of the story. (not that that’s a crime, just that her story couldn’t manage to engage me the way the other characters’ did).

Neither Lady Carmel nor Betty are the fluffy brained females that they seem to be in the beginning. Indeed I found both Lady Carmel’s and Betty’s “fluffiness” as well as their sensitivity (which the reader is made privy to through the course of the story) to be peculiarly English in its portrayal. Then there’s Andrew who belongs to a new restless generation and yet who cannot be rid of the “Lord-of-the-Manor” feeling that he’s assailed with whenever he’s home.

Lady Carmel finds fulfillment in arranging flowers for the manifold rooms of the manor while Betty has a vague sense of disquiet at her advancing age. (I couldn’t help feeling incredulous at both Betty’s and Cluny’s realization that they are past the first blush of youth. Betty’s 22 and Cluny’s 20. Of course I’m reading a book more than 60 years after it was written, but still! They’re 20! And 22! Babies, practically! Well, not babies but you know what I mean).

All these disparate bits come together to give a glimpse into the life of the landed gentry of mid-20th-century England. It was this drawing back of the curtain on the “upstairs” and the “downstairs” that prevented the book from being a DNF for me. The housekeeper’s reactions in particular served to accentuate the feeling of peeping into another world, starting with her reaction at Cluny Brown’s walking the neighboring Colonel’s dog on her afternoons off:

But Mrs. Maile remained uneasy . . . She remembered some of Mr. Andrew’s sayings . . . cracks in civilization, the breaking-up of society, world revolution, the decay of the West; and for the first time, their meaning struck home.

The setting of Friars Carmel too is very much a character in its own right, an “oyster . . . [that could] smooth and overlay” whatever forayed into its precincts and transform it into something “like a pearl;” a treatment that was of course not necessarily applied to parlour-maids.

This sense of the English landscape being a part of the quintessential Englishness is captured perfectly in a dialogue by the foreigner in the story:

I have so often thought how in all English art the place of women is taken by landscape. Your poetry is full of it, you are a nation of landscape painters. In other countries a man spends his fortune on a mistress; here you marry a fortune to save your estates. . . .  [the industrial revolution] was real life, that was business. But when a businessman has made money, what does he do? He buys a place in the country. That is what you all want. You cannot escape it. Your green grass is as strong as the creepers of a jungle, with the additional advantage that you are able to play games on it. Or lie in it.

While it was not a complete meh, I think I might have enjoyed this story more as a movie or a play!