I love stories which read like a love song dedicated to the everydayness of our lives. There’s something about that amplification of the extraordinariness in the ordinary—details that we take for granted, details that our gaze barely manages to register—that speaks to me in a way that nothing else can. I’m also a sucker for stories that focus on the indomitability of the human spirit, no matter the odds. Station Eleven is basically woven out of the warp and weft of these two strands, and so it’s no surprise that I really, really liked it.

A deadly, fast-acting flu wipes out 99% of the world’s population right at the start of the story. It’s a testimony to Mandel’s writing that the build-up to this inevitable, fast-approaching doom though devoid of any panicked scenes of chaos still manages to be completely chilling:

The conversation in Spanish went on in the nearby darkness. The shops still shone on the horizon; there was still no breeze. It was morning in New York City. She imagined Clark hanging up the receiver in his office in Manhattan. This was during the final month of the era when it was possible to press a series of buttons on a telephone and speak with someone on the far side of the earth.

Civilization as we know it is “brutally interrupted,” and is reduced to a barebones version of itself. Time flows back and the world becomes what it used to be before technology and industrialization convened to shape it in its currently recognizable form. 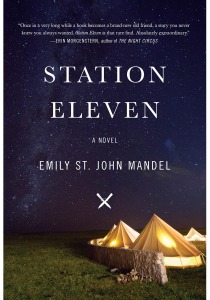 Woven through this narrative of a residual humanity—that one would assume would be focused on survival rather than going about brazenly proclaiming “Because survival is insufficient”—is the portrait of lives before the fall. The fulcrum of these lives is an aging actor, Arthur Leander, who dies of a heart-attack in the very first pages of the book. The crossing over of these lives—their interconnectedness—and the way Arthur Leander himself is at the center of all these connections is one of my favorite parts about this book. (And for the record, I guessed correctly—the very first time I might add—the identity of the prophet).

The moving in and out of the pre-fall world and the post-fall world made reading Station Eleven a dreamlike experience. The act of looking at the current world through Mandel’s post apocalyptic lens, and the immediacy of this post apocalyptic world—just 20 years from an unknown current date—lent a poignancy to the story which wasn’t necessarily sad but was more akin to suddenly finding yourself becoming a spectator in your own life, and feeling like you’ve become a sort of voyeur even though you once knew everything intimately.

You walk into a room and flip a switch and the room fills with light. You leave your garbage in bags on the curb, and a truck comes and transports it to some invisible place. When you’re in danger, you call for the police. Hot water pours from faucets. Lift a receiver or press a button on a telephone, and you can speak to anyone. All of the information in the world is on the Internet, and the Internet is all around you, drifting through the air like pollen on a summer breeze. There is money, slips of paper that can be traded for anything: houses, boats, perfect teeth.

I don’t think I got attached to any specific character in the story but the writing and the wanting-to-know-how-it-all-comes-together was compelling enough to keep me reading.

One last aspect that I want to mention was the way that the prophet’s character was portrayed towards the end. It would have been very easy to cast him as a raving lunatic who should be destroyed at all costs. That Mandel gives him a very understated backstory, and that the words “We long only to go home . . . We dream of sunlight, we dream of walking on earth” are central to the scene, and that these words come from the “Station Eleven” comic made me like Station Eleven a little bit more.

I’ll end with another bit that spoke to me:

Toronto was falling silent. Every morning the quiet was deeper, the perpetual hum of the city fading away.

On silent afternoons in his brother’s apartment, Jeevan found himself thinking about how human the city is, how human everything is. We bemoaned the impersonality of the modern world, but that was a lie, it seemed to him; it had never been impersonal at all. There had always been a massive delicate infrastructure of people, all of them working unnoticed around, and when people stop going to work, the entire operation grinds to a halt. No one delivers fuel to the gas stations or the airports. Cars are stranded. Airplanes cannot fly. Trucks remain at their points of origin. Food never reaches the cities; grocery stores close. Businesses are locked and then looted. No one comes to work at the power plants or the substations, no one removes fallen trees from electrical lines.