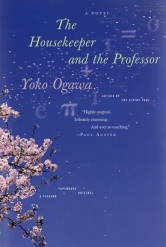 I’m not sure how I came across “The Housekeeper and the Professor” by Yoko Ogawa. Most likely it was after a session like this: http://xkcd.com/214/

No matter, it’s probably the first book I’ve read that reminds me of a quiet, contented evening. The book’s main characters are a 60 something mathematics professor, his housekeeper and her son. Ever since an accident the professor has been beset by a curious affliction; he can remember his life till 1975 and after that he remembers everything in slices of 80 minutes – “it’s as if he has a single, eighty-minute videotape inside his head, and when he records anything new, he has to record over the existing memories.”

The prose is simple and flows; it sparkles wherever math enters the conversation. Since the original novel is in Japanese, credit certainly goes to Stephen Snyder, the translator.

Here’s how the Professor describes number theory, the subject he studied:

I uncovered propositions that existed out there long before we were born. It’s like copying truths from God’s notebook, though we aren’t always sure where to find this notebook or when it will be open.

It’s important to use your intuition. You swoop down on the numbers, like a kingfisher catching the glint of sunlight on the fish’s fin.

A problem has a rhythm of its own, just like a piece of music. Once you get the rhythm, you get the sense of the problem as a whole, and you can see where the traps might be waiting.

Or on the importance of the square-root (the professor names the housekeeper’s son Root because of his flat head and the way his hair falls):

The square root is a generous symbol, it gives shelter to all the numbers.

With just 180 pages, The Housekeeper and The Professor is a fast read. The inherent beauty of the story triumphs over the sadness of the situation which the characters have to deal with.  Though there are no startling revelations or life-changing epiphanies in the book, the seemingly simple story leaves the reader feeling moved. Like I said, it made me think of a quiet evening which though devoid of any ecstatic high is humming with a gentle contentment.

If you like stories which are a little off-beat or love words or would like to have a glimpse into the magic inherent in numbers, go pick up this book.

2 thoughts on “the housekeeper & the professor”