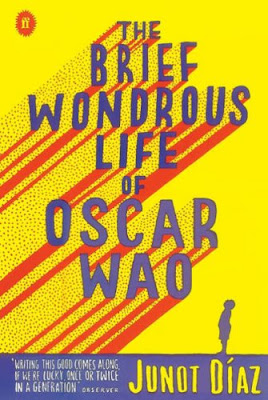 Lush, vivid descriptions – details which bring to life the smell, the scenery, the people of The Dominican Republic and their beliefs and customs, that’s the first thing that comes to mind when I think of “The Brief Wondrous Life of Oscar Wao” by Junot Diaz. The first book I’ve read with a Dominican flavour, it leaves me feeling that there’s a strong commonality between Indians & Dominicans – the ability to live, love and laugh despite their respective polities. As the title of the book suggests, the reader gets to look at the brief, wondrous life of Oscar de Leon (renamed Oscar Wao through the course of the book), an expatriate Dominican and his immediate family.

Our choices are mostly a response to the circumstances we find ourselves in and each character in the story is brought to life by giving the reader an intimate look at the circumstances and the context in which they live their life. In fact, quite a few life stories are packed in this 335 page book. The recounting of the details of how each person’s life came to be as it is, the choices they made along the way and the forces which shaped those choices is perhaps the book’s strength.

I have to admit that I found the stories of Oscar’s family members, including mother Belicia and grandfather Abelard much more enthralling than Oscar’s own story. I guess I could not connect with Oscar’s deep need for a girlfriend (and all that it entails), a theme which dominates most of Oscar’s story throughout the book. I’m assuming this would have a deeper resonance with an American audience since having a relationship, especially during one’s teen years is something which all American teenagers deeply desire (I might be totally wrong in this reading though!).

Contrarily enough, even though Oscar’s story was not my favourite I couldn’t help falling in love with him. Though I wanted to yell at him in a lot of places, there’s a quirkiness and an innate goodness about Oscar which makes you… well, listen to his story. His interactions and conversations with Yunior (the “Watcher” and chief narrator of the story) perhaps reflect this the best. It’s also hard to overlook his actions towards the end of the story. I wonder what such a deeply felt conviction feels like.

While the abrupt change in narrator from one section to another is a little disorienting, the overall structure of the book, though a departure from the normal, is engaging. Absorbing my interest were also the numerous footnotes interspersed through the story. Even though I was impatient to continue with the story, I found my gaze wandering towards these “little stories” which talk about the the History of The Dominican Republic and give a context to the Dominican world and its people.

Add to this sections with names like “The Moronic Inferno”, “Back Among the Living” and “Land of the Lost” and bits and pieces like, “You ain’t weird… believe me, I’m the top expert in the state” a summation of himself by Oscar, or “Dude wore his nerdiness like a Jedi wore his light saber or a Lensman her lens. Couldn’t have passed for Normal if he’d wanted to”, summation of Oscar by “Watcher” and you have a tale which grips and draws you inextricably in the world of its inhabitants.

The only thing which threw me off was the use of Spanish words, phrases and sentences throughout the story. A glossary at the end would have been a nice addition. Nonetheless this poignant, at times heart-breaking and at times funny tale leaves you moved. It’s definitely worth a read.